During the last few months at Videolabs, I added support for tile encoding in rav1e (a Rust AV1 Encoder).

AV1 is an open and royalty-free video coding format, concurrent with HEVC (H.265).

Rav1e is an encoder written in Rust, developped by Mozilla/Xiph. As such, it takes an input video and encodes it to produce a valid AV1 bitstream.

Tile encoding consists in splitting video frames into tiles that can be encoded and decoded independently in parallel (to use several CPUs), at the cost of a small loss in compression efficiency.

This speeds up encoding and increases decoding frame rate. 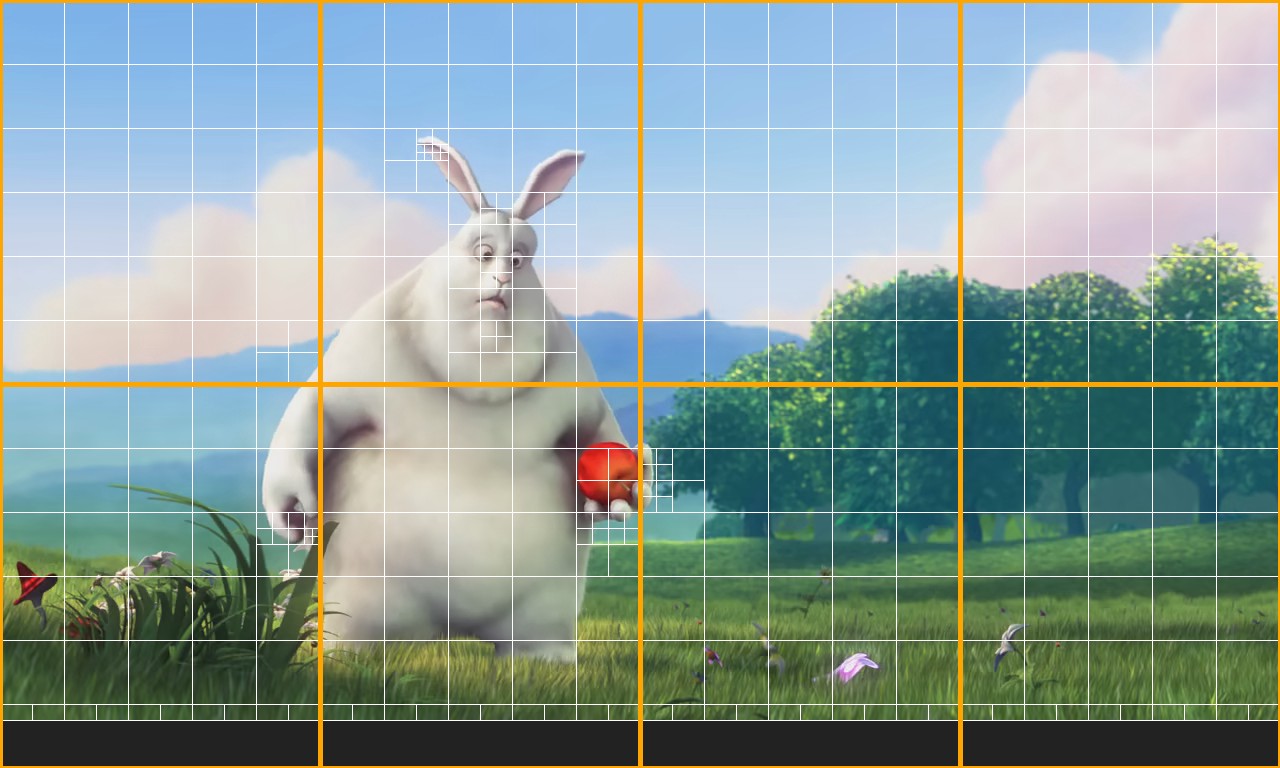 To prepare for tiling, some refactoring was necessary.

A frame contains 3 planes (one for each YUV component, possibly subsampled). Each plane is stored in a contiguous array, rows after rows.

To illustrate it, here is a mini-plane containing 6×3 pixels. Padding is added for alignment (and other details), so its physical size is 8×4 pixels:

In memory, it is stored in a single array:

The number of array items separating one pixel to the one below is called the stride. Here, the stride is 8.

The encoder often needs to process rectangular regions. For that purpose, many functions received a slice of the plane array and the stride value:

This works fine, but the plane slice spans multiple rows.

In memory, the resulting plane regions are not contiguous:

In Rust, it is not sufficient not to read/write the same memory from several threads, it must be impossible to write (safe) code that could do it. More precisely, a mutable reference may not alias any other reference to the same memory.

As a consequence, passing a mutable slice (&mut [u16]) spanning multiple rows is incompatible with tiling. Instead, we need some structure, implemented with unsafe code, providing a view of the authorized region of the underlying plane.

As a first step, I replaced every piece of code which used a raw slice and the stride value by the existing PlaneSlice and PlaneMutSlice structures (which first required to make planes generic after improving the Pixel trait).

After these changes, our function could be rewritten as follow:

So now, all the code using a raw slice and a stride value has been replaced. But if we look at the definition of PlaneMutSlice, we see that it still borrows the whole plane:

So the refactoring, in itself, does not solves the problem.

What is needed now is a structure that exposes a bounded region of the plane.

In memory, the matrix is stored in a single array:

To do so, let’s define a ColumnMut type, and split the raw array into columns:

The PhantomData is necessary to bind the lifetime (in practice, when we store a raw pointer, we often need a PhantomData).

We implemented Index and IndexMut traits to provide operator []:

The iterator returned by columns() yields a different column every time, so the borrowing rules are respected.

Now, we can read from and write to a matrix via temporary column views:

Even if the columns are interlaced in memory, from a ColumnMut instance, it is not possible to access data belonging to another column.

Note that cols and rows fields must be kept private, otherwise they could be changed from safe code in such a way that breaks boundaries and violates borrowing rules.

A plane is split in a similar way, except that it provides plane regions instead of colums.

In practice, more structures related to the encoding state are split into tiles, provided both in const and mut versions, so there is a whole hierarchy of tiling structures:

The split is done by a separate component (see tiler.rs), which yields a tile context containing an instance of the hierarchy of tiling views for each tile.

A priori, there are mainly two possibilities to express offsets during tile encoding:

The usage of tiling views strongly favors the first choice. For example, it would be confusing if a bounded region could not be indexed from 0:

Worse, this would not be possible at all for the second dimension:

Therefore, offsets used in tiling views are relative to the tile (contrary to libaom and AV1 specification).

All the frame-level structures have been replaced by tiling views where necessary.

The tiling views exist only temporarily, during the calls to encode_tile(). While they are alive, it is not possible to access frame-level structures (the borrow checker statically prevents it).

Then the tiling structures vanish, and frame-level processing can continue.

This schema gives an overview:

To enable tile encoding, parameters have been added to pass the (log2) number of tiles --tile-cols-log2 and --tile-rows-log2. For example, to request 2x2 tiles:

Currently, we need to pass the log2 of the number of tiles (like in libaom, even if the aomenc options are called --tile-columns and --tile-rows), to avoid any confusion. Maybe we could find a better option which is both correct, non-confusing and user-friendly later.

Now that we can encode tiles, we must write them according to the AV1 bitstream specification, so that decoders can read the resulting file correctly.

According to Tile info syntax, the frame header signals the number of columns and rows of tiles (it always signaled a single tile before).

In addition, when there are several tiles, it signals two more values, described below.

For entropy coding, the encoder maintain and update a CDF (Cumulative Distribution Function), representing the probabilities of symbols.

After a frame is encoded, the current CDF state is saved to be possibly used as a starting state for future frames.

But with tile encoding, each tile finishes with its own CDF state, so which one should we associate to the reference frame? The answer is: any of them. But we must signal the one we choose, in context_update_tile_id; the decoder needs it to decode the bitstream.

In practice, we keep the CDF from the biggest tile.

The size of an encoded tile, in bytes, is variable (of course). Therefore, we will need to signal the size of each tile.

To gain a few bytes, the number of bytes used to store the size itself is also variable, and signaled by 2 bits in the frame header (tile_size_bytes_minus_1).

Concretely, we must choose the smallest size that is sufficient to encode all the tile sizes for the frame.

According to General tile group OBU syntax, we need to signal two values when there are more than 1 tile:

The tile size (minus 1) is written in little endian, and use the number of bytes we signaled in the frame header.

That’s all. This is sufficient to produce a correct bitstream with multiple tiles.

Thanks to Rayon, parallelizing tile encoding is as easy as replacing iter_mut() by par_iter_mut().

I tested on my laptop (8 CPUs) several encodings to compare encoding performance (this is not a good benchmark, but it gives an idea, you are encouraged to run your own tests). Here are the results:

Speedups are quite good for 2 and 4 tiles.

*The reason why the speedup is lower than expected for 8 tiles is that my CPU has actually only 4 physical cores. See this reddit comment and this other one.

Tile encoding parallelizes only a part of the whole process: there are still single-threaded processings at frame-level.

The (not-so-reliable) benchmark results for 2 and 4 tiles suggest that tile encoding represents ~90% of the whole encoding process.

Not everything worked the first time.

The most common source of errors while implementing tile encoding was related to offsets.

When there was only one tile, all offsets were relative to the frame. With several tiles, some offsets are relative to the current tile, but some others are still relative to the whole frame. For example, during motion estimation, a motion vector can point outside tile boundaries in the reference frame, so we must take care to convert offsets accordingly.

The most obvious errors were catched by plane regions (which prevent access outside boundaries), but some others were more subtle.

Such errors could produce interesting images. For example, here is a screenshot of my first tiled video: 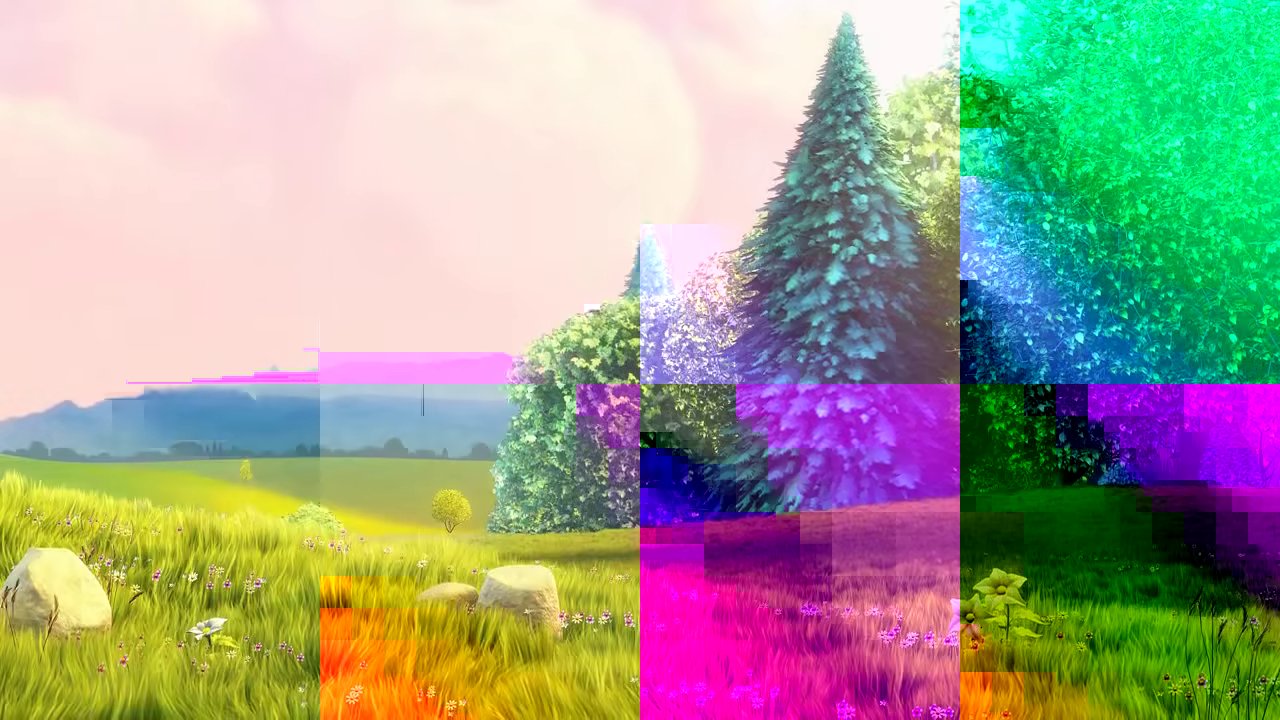 One of these offsets confusions had been quickly catched by barrbrain in intra-prediction. I then fixed a similar problem in inter-prediction.

But the final boss bug was way more sneaky: it corrupted the bitstream (so the decoder was unable to decode), but not always, and never the first frame. When an inter-frame could be decoded, it was sometimes visually corrupted, but only for some videos and for some encoding parameters.

After more than one week of investigations, I finally found it. \o/

Implementing this feature was an awesome journey. I learned a lot, both about Rust and video encoding (I didn’t even know what a tile was before I started).

Big thanks to the Mozilla/Xiph/Daala team, who has been very welcoming and helpful, and who does amazing work!