Audio forwarding is one of the most requested features in scrcpy (see issue #14).

Last year, I published a small experiment (USBaudio) to forward audio over USB, using the AOA2 protocol. Unfortunately, this Android feature was unreliable, and has been deprecated in Android 8.

Here is a new tool I developed to play the device audio output on the computer, using the Playback Capture API introduced in Android 10: sndcpy.

The name follows the same logic:

This is a quick proof-of-concept, composed of:

The long-term goal is to implement this feature properly in scrcpy.

How to use sndcpy

You could either download the release or build the app.

VLC must be installed on the computer.

Plug an Android 10 device with USB debugging enabled, and execute:

If several devices are connected (listed by adb devices):

It will install the app on the device, and request permission to start audio capture: 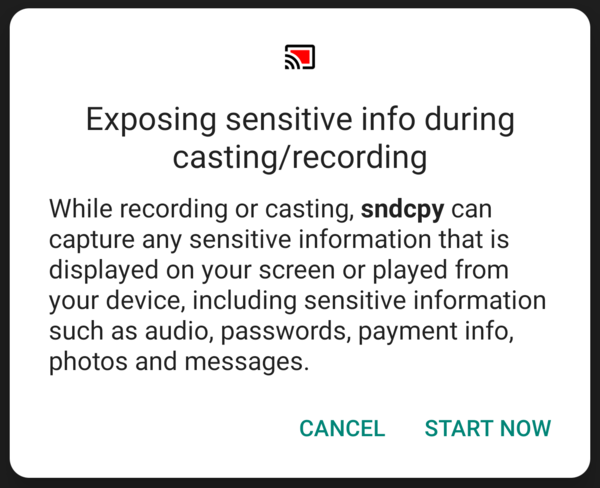 Once you clicked on START NOW, press Enter in the console to start playing on the computer. Press Ctrl+c in the terminal to stop (except on Windows, just disconnect the device or stop capture from the device notifications).

The sound continues to be played on the device. The volume can be adjusted independently on the device and on the computer.

sndcpy may only forward audio from apps which do not prevent audio capture. The rules are detailed in §capture policy:

So some apps might need to be updated to support audio capture.

Ideally, I would like scrcpy to support audio forwarding directly. However, this will require quite a lot of work.

In particular, scrcpy does not use an Android app (required for capturing audio), it currently only runs a Java main as shell (required to inject events and capture the screen without asking).

And it will require to implement audio playback (done by VLC in this PoC), but also audio recording (for scrcpy --record file.mkv), encoding and decoding to transmit a compressed stream, handle audio-video synchronization…

Since I develop scrcpy on my free time, this feature will probably not be integrated very soon. Therefore, I prefer to release a working proof-of-concept which does the job.